On March 1st, Romanians celebrate the coming of spring by giving and receiving small trinkets tied with red and white string. These trinkets are called mǎrţişor and they mark the beginning of the agricultural new year. Before we learn more about the history and symbolism of the mǎrţişor, it might be useful to learn how to pronounce this word.

While there is consensus among historians and civilians alike that the mǎrţişor is a symbol of spring, there are several theories as to the origins of this tradition. This blog will present the two main theories but will also include additional sources with different theories in the bibliography for the interested reader.

One legend says that the sun disguised itself as a man and came to visit earth. An evil spirit recognised the sun for who he who really was and kidnapped him. As the world mourned the sun’s loss, the birds no longer sang, and the plants no longer blossomed (Routa 2016).

One day, a young man decided to find the spirit and confront him so as to free the sun. When the young man finally found the spirit’s hiding place, they engaged in a battle that lasted for days. The young man eventually won the battle, but he had been wounded and his blood soaked into the snow where it froze (Routa 2016).

The liberated sun then rose into the sky, and warmth and sunlight returned to the world once more. As the sunlight melted the snow, the water soaked in the brave man’s blood began to flow across the land, leaving behind it the new blooms of spring (Routa 2016).  The red string of the mǎrţişor represents the blood of the young man and the white represents the snow and the snowdrop which is the first flower to bloom in spring (Routa 2016).

Another legend says that Baba Dochia (Old lady Dochia [pronounced dokia]) had a son called Dragobete who married a girl that Baba Dochia despised so, in true mother-in-law form, she went out of her way to make this girl’s life miserable (Friedman & Johnson n.d.).

One cold winter day, Baba Dochia told her daughter-in-law to go out into the mountains and collect some berries, and that she was not to return until she had done so. The daughter-in-law wanted to please Baba Dochia and so did as she was told. She searched and searched through the snow but could not find any berries as it was still winter. She was cold and miserable and began to cry. Suddenly, and elderly man appeared and asked her what was the matter. She explained, and he offered to help her. Unbeknownst to the girl, this man was Zalmoxis, the Sun God and chief deity of the Dacians (the ancestors of modern-day Romanians). He took pity on the girl and produced some berries for the girl which she happily accepted and took to Baba Dochia.

Baba Dochia was astounded to see the berries and remarked ‘spring has come early. I must take my sheep out to pasture’. As it was still cold outside, she wrapped nine sheep skins around her and headed to the mountains with her flock of sheep (Friedman & Johnson n.d.). For a while, the weather improved so she began to remove her sheep skins one by one. Unfortunately for her, it was not spring yet and as night fell, a cold wind blew down from the mountains. She and her sheep were caught off guard and froze on the mountain (Friedman & Johnson n.d.). Indeed, there is a large stone on Ceahlau Mountain in the Carpathian Mountains which is said to be Baba Dochia frozen in time by the winter winds (The legend of Dochia Stone from Ceahlau Mountain, 2009).

While these are two very separate stories, both make reference to spring and to the return of the sun which suggests that the tradition of exchanging mǎrţişoare (that’s the plural of mǎrţişor) can be traced back to pre-Christian times, when Romania was called Dacia (pronounced Dutch-ia) and sun worship was practiced. Indeed, some sources attest that this practice has an 8000-year history (Mǎrţişor cu dor de acasă – Împreună ducem tradiţiile mai departe, 2018). To best understand why this practice came to be, it is necessary to know a little of Romania’s history.

A brief history of sun worship in pre-Christian Romania

The ancestors of modern-day Romanians were the Getae-Dacians who are an ethnic sub-group of the Thracians, who in turn, are a subgroup of the Indo-European family (Ionescu & Dumitrache 2012). Historical records show that the Getae people lived around the eastern Carpathians (present day western Romania), while the Dacians lived around the south Danube River and Black Sea (present day eastern Romania) (Ionescu & Dumitrache 2012). The Getae and Dacians are both branches of the same tribe of Thracians who both worshipped the God Zalmoxis (Treptow, 1988). Getae and Dacian are used interchangeably to refer to these two groups throughout history, so to avoid confusion, the term Getae-Dacian will be used here to refer to the ancestors of the modern Romanian people.

While there is some dispute over whether the Getae-Dacians were monotheistic or polytheistic, there is consensus that the primary deity among these tribes was Zalmoxis who was the personification of the sun (Treptow, 1988). It was believed that he had dominion over the sky and all celestial bodies, and that he taught the Getae-Dacians astronomy (Ionescu & Dumitrache 2012).

Evidence of solar worship can be found throughout Getae-Dacia and was likely inherited from their Pelasgian forefathers (Pelasgian being a Greek exonym for indigenous populations which preceded the Greeks) who lived on and around the Island of Leuce (present day Romanian Island of Snakes in the Black Sea). One of the best forms of evidence for Getae-Dacian sun worship are the numerous sun temples scattered throughout this region, the best known being the Pantheon temple in Sarmizegetusa, the capital of Dacia (Ionescu & Dumitrache 2012). Like all Getae-Dacian temples, this one is roofless (presumably to allow the sunlight in and for astronomical observation), faces east (towards the sunrise) and has pillars which are arranged according to the solar calendar (Treptow, 1988). In this regard, Getae-Dacian temples resemble Stonehenge in England in both form and function.

Both structures are comprised of two circles with north-south and east-west alignments. At both sites, the sun’s rays can only pass completely unobstructed through the entire structure on December 22, the winter solstice and the astronomical beginning of winter in the northern hemisphere.  Furthermore, the architecture of the temple at Sarmizegetusa suggests that the Getae-Dacians knew that it took the earth 365 days to travel around the sun, and they used this information to make agricultural decisions. Indeed, their new year began on March 21st (the spring equinox and the astronomical beginning of spring). As such, Ionescu & Dumitrache (2012) attest that this is the beginning of the mǎrţişor tradition. Just as today, we celebrate the beginning of the Gregorian new year with fireworks, the Getae-Dacians may have celebrated by exchanging handcrafted symbols of life and regeneration. The red and white string may symbolise the duality of vitality and the frost of winter. As Romania became Christianised in the fourth century AD, the exchanging of mǎrţişoare may have shifted to March 1st, the start of spring according to the Gregorian calendar (Treptow, 1988 and Ionescu & Dumitrache, 2012). This is certainly plausible as there are several astronomical references in Romanian Orthodox churches, but that is a topic for another post.

Whatever its origins, the practice of making, giving and receiving mǎrţişoare has survived to modern times and has recently been included on UNESCO’s list of Intangible Cultural Heritage (Michaela, 2017 and UNESCO 2018). UNESCO recognises that the making and exchanging of mǎrţişoare promotes community cohesion, intergenerational exchange and creativity (UNESCO 2018).

There is no limit on how many mǎrţişoare a person can give and receive. However, it is tactful to wear every mǎrţişor you receive so as not to hurt anyone’s feelings. There are different recommendations for how long the mǎrţişor should be worn: some say it should be worn for nine days to represent the nine coats Baba Dochia shed, while others say it should be worn for the entire month of March. Other sources say that it should be worn until you see the first spring bloom, but taking global warming into consideration, that would be in February.

It is said that the original mǎrţişor trinket was a single coin but today, 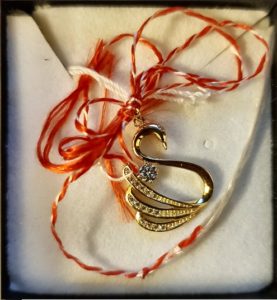 mǎrţişoare can be made out of paper, pebbles, shells, beads, gems, clay or precious metals. Some people tie the red and white string around a bouquet of flowers (Routa 2016). When you decide to take the mǎrţişor off, it should be tied to a fruit tree (Routa 2016). This ensures that the fruit tree will be fruitful (literally) in the coming year. In the Transylvania region of Romania, the string is hung from hooks or doorknobs in the house or even from a pet’s collar to protect from evil spirits (Routa 2016).

While this is historically a Romanian practice, it is not an exclusive one. It is also celebrated in Moldova (which was a part of Romania until recently), Bulgaria, FYR Macedonia and Albania but it doesn’t stop there. This practice is open to everyone. There are several tutorials online for how to make a mǎrţişor including this one which is visuals only do don’t worry if you don’t speak Romanian.

If you’d like to share your mǎrţişor on social media or view other examples, you can use the hashtags #mǎrţişor or #martisor. TVR International is also calling for video and picture submissions from the public of themselves wearing a mǎrţişor until March 8th 2018. To view the submissions or even submit your own, please visit the TVR Facebook page.