Nowruz is an ancient celebration which began in greater Iran some 15,000 years ago. It marks the beginning of astronomical spring is about celebrating and reaffirming ties with nature and with friends and family. It is a public holiday in several countries and has been recognised by UNESCO as part of Humanity’s Intangible Cultural History.

Nowruz (also spelled as Norooz or Nouruz) which translates as ‘new day’ in Farsi, is the 13-day celebration which marks the beginning of Iranian new year on the first day of the Spring Equinox. This is a time for celebrating the renewal of nature and for promoting cooperation and unity within families and the wider community. Nowruz usually commences around the 21st of March each year, but for an accurate calculation of the exact moment that the sun will cross the equator thus beginning the equinox, please visit www.7seen.com .

Nowruz is an ancient festival which is said to date as far back as 15 000 years ago (Batool 2012; Jafarey 2007). It is said that Jamshid, the fourth King of the World in Iranian mythology, created the first Nowruz by saving humanity from a particularly harsh winter. Jamshid is credited with many inventions and innovations which improved the quality of life of his people and allowed civilization to flourish. In particular, he is credited with teaching humanity how to farm and raise animals instead of being hunter gatherers. This knowledge allowed humanity to survive the harshest winter after which they celebrated the first Nowruz which marks the first day of spring and celebrates the renewal of nature (Batool 2012).

Nowruz was then adopted into the Zoroastrian religion, where it is the most

important of the six seasonal festivals of this religion (Jafarey 2007). Nowruz maintains its significance as the first say of spring and of the new year, but also has an added symbolic meaning in Zoroastrianism. The prophet Zoroaster (also called Zarathustra), taught that there is only one god and that all life is a struggle to maintain order and righteousness in the face of chaos. As the majority of the population was illiterate at this time, spring was used as a metaphor for the ultimate triumph of good over evil and the restoration of the world to the original state of purity in which god created it (Boyce 2009).

Nowruz has continued to be celebrated in modern-day Iran from the time of King Jamshid to present day. It is demarked as a public holiday in eleven countries in the Middle East and the Caucus region including Iran, India, Pakistan, Afghanistan, Azerbaijan, Tajikistan and Georgia (Zamani-Farahani 2013). Beyond this, it is also observed by minority populations in several countries across the world.

As of 2009, the United Nations (UN) recognised Nowruz as part of the Intangible Cultural Heritage of Humanity (Nowruz Day 21 March n.d.). The UN believes that promoting recognition of humanity’s cultural heritage is a way to foster intercultural dialogue and respect for different ways of life (What is intangible cultural heritage? n.d). Likewise, Nowruz is also a time to affirm a harmonious existence with nature and with one another (Nowruz Day 21 March n.d.) Aside from traditional cultural and religious celebrations, Heads of State and distinguished ambassadors from around the world also gather at the United Nations’ Head Quarters in New York to celebrate Nowruz (UNESCO Liaison Office 2017).

Traditional Nowruz celebrations begin before the spring equinox with house cleaning known as Khaneh Tekani (shaking the house) in Farsi (Zamani-Farahani 2013; No-rooz, The Iranian new year at Present Times 2018).  The home is decorated with flowers, and new clothes and furniture are purchased for the celebrations (Batool 2012; Zamani-Farahani 2013).

On the eve of the last Wednesday before Nowruz, the Wednesday Feast called Chahar Shabneh Suri takes place (Zamani-Farahani 2013). At this time, three bonfires are lit to represent the Zoroastrian values of good deeds, good thoughts and good words. Alternatively, only one bonfire is lit to represent humanity’s unity with god. People jump over the bonfires to cleanse themselves of any misfortune or illness before the new year (Zamani-Farahani 2013; No-rooz, The Iranian new year at Present Times 2018). 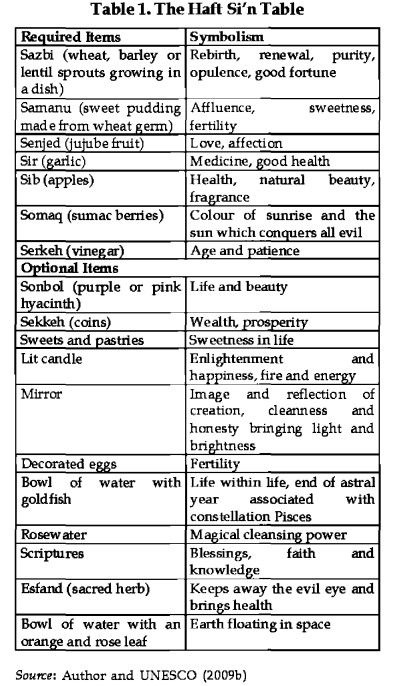 Following the immediate celebrations at home, the next few days of Nowruz are spent visiting family and friends. Typically, younger people visit their older relatives first as a sign of respect to the older generation (Batool 2012). Out of convenience, some people will hold large parties at this time and invite everyone at once to avoid missing out on any visits.

and is typically spent outside enjoying nature (No-rooz, The Iranian new year at Present Times 2018; Zamani-Farahani 2013). This is because thirteen is considered an unlucky number, so many people like to be outside to avoid any misfortune that may be awaiting them at home. At this time, the sabzi (sprouts) from the Sofreye Haft Seen (Spread of the Seven S’s) is thrown away into running water. This represents letting go of any past misfortune so that it does not continue into the new year (Fulton & Ardalan 2016). The Nowruz celebrations end at sunset on sizdah bedar (the thirteenth day).